One October day in 1992, my life was indelibly changed by a young, sorrel Quarter Horse gelding with big ears and a quirky personality. Beau has been a constant, central presence in my life ever since. On Thanksgiving, our paths diverged for the first time in 25 years. The truth is that words cannot sufficiently express my sadness, the impact my sweet boy had on my life, or how much I will miss him. He was a steadfast partner and one of my greatest teachers. My heart is grateful for his full, well-lived life and all that we have shared. 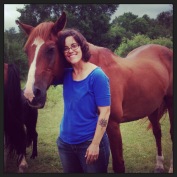 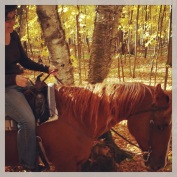 As herd animals, horses depend on the company of their herdmates for safety, survival, and companionship. When Beau, a scrawny, four-year-old sorrel gelding, came home as my first horse, I became his herd.  Literally.  It would be several years before another horse would come, and even then, their stay would be temporary.  For years, it was just the two of us, and I credit this for the strength of our bond, even when he did join a herd eventually.

As I’ve prepared to write this post as a eulogy of sorts, I’ve struggled with what to say.  How will it ever be enough to capture his essence?

And then, in a recent session with my program coach, she asked, “What’s your favorite memory of Beau?”

I couldn’t help but smile, and in that moment, I remembered that THAT is what it is all about – the things that instantly bring a smile to our faces.

On Thanksgiving, we were getting ready to sit down for dinner around my parents’ table when I got the call that Beau was down and unable to get back up.  As we waited for the next call saying that the vet had come and he was gone, there were plenty of tears, anger, and a just enough shared memories to take the edge off. My dad told a story about how early on, when he was working on Beau’s shelter in the paddock, he was looking for the hammer, only to turn around and find that Beau had it in his mouth.  Beau always had the best sense of humor I’ve ever seen in a horse and, despite the sadness, we all smiled.

Grief is sneaky and shifty.  The raw moments tend to slam me out of nowhere while others are soft, bittersweet, and nostalgic.  With a few weeks behind me, the raw moments are fewer and farther between. I’m able to view his long life and our time together with an abundance of gratitude.  In hindsight, it was clearly his time. The things that make me smile are a touchstone, a way through the rest of my path without him by my side.  I’m so fortunate that I have so many to choose from.

That is how I have chosen to honor him: with smiles.  Over time, I will add to the list and, maybe in the end, I’ll capture his essence after all.

Do you have a favorite memory of Beau? Leave a comment, and I’ll add it to the list.

I love you, my sweet boy.  Until next time,

As a herd of two, Beau and I spent a lot of time playing horsey games, and one of our favorites was ‘tag.’ As I would go one way, he would follow, much like a cutting horse following a cow.  We spent hours goofing around this way.

My mom and I were hauling Beau down the highway on our way to on of our first horse shows, when the two-horse trailer started rocking, which shook the vehicle too.  We had just gone past an exit, so we pulled over to see what was causing the problem.  When we checked in the trailer, Beau had gotten his front legs into the manger, and one of his back legs over the trailer divider.  There we were, pretty far from home with no idea how we were going to help him out in order to assess for injuries.  As there were no cell phones then, I really do not remember how we contacted people, but the vet ended up meeting us on the highway, sedating him, and helping us free him from the tough situation he’d gotten himself in.  In the end, he ended up cutting his poll in a perfect triangle shaped flap from ear to ear and spent the better part of that summer with a shaved buzzcut for a forelock. I wasn’t smiling at the time, but it is so indicative of the growth and challenges we overcame in our early years.

Fast forward a little bit, and hit the repeat button.  On our way home from the county fair, we felt the familiar rocking of the trailer and vehicle and got out to find him half in the manger again with a hoof caught in his hay net.  We cut the hay net and safely got him out of the trailer.  Since we were only a mile or so from home, in a fit of frustration (and probably a bit of logic), I walked him home.  He had split his old injury open again, and the vet that came out said not to call if it happened again on account of the scar tissue and difficulty stitching him up.  We found him a little cushioned cap that attached to his halter and protected his poll while he was trailered.  My dad called him Beaner from then on, and it became lifelong nickname.